Servando Cabrera Moreno (b. Havana, 1923 -d. Marianao, 1981); graduated from the San Alejandro School of Fine Arts in 1942. He held his first individual exhibition in the Havana Lyceum in September 1943. Three years later he followed a course at the Art Students League in New York. In 1949 he attended the Grande Chaumière in Paris. Later, in 1950 and 1951, came his first rupture: oil paintings with a geometric stylization of cubist affiliation brought him nearer to abstraction until approximately 1954. His rejection of the mechanisms of the art market, which he experienced for the first time that same year during his successful exhibition at La Roue Gallery in Paris, brought about a sudden shift in his paintings. In Spain he made a series of realist drawings in charcoal where he depicted popular characters, a line he continued until 1955 in Cuba, culminating with his oil painting Los carboneros del Mégano (The Megano’s Charcoal Makers). Folk art influenced his work for a while. 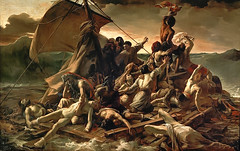